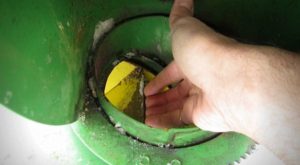 Many people lose their fingers or worse, their hands in snowblower accidents every year. Most people put their fingers or hands were they shouldn’t. They get sliced by the auger or by the impeller. Snowblower manufacturers advise all operators to shut the snowblower off, before dislodging any compacted snow that is impeding the snowblower. This is a pretty standard safety recommendation. Don’t put your hands or your arm anywhere near the auger or the impeller on a two-stage snowblower. Do not become a statistic for Snow Blower Finger Accidents.

But consumers are still getting injured from snowblowers when the engine has been turned off. They are losing fingers and damaging their hands drastically in many cases. A recent study undertook to find out why this was happening and it comes down to a build up of rotational force!

When wet snow gets stuck in a snowblower and plugs the machine you need to shut the engine off to clear the snow. Most people know that they should use a stick or a special tool provided by the snowblower manufacture. Use the tool clear the snow from the auger and also from the impeller.

But sometimes that just does not work. It is wet snow and difficult to remove from that area of the snowblower. In frustration they reach in with their hands to clear the snow. Particularly from around the impeller as the picture shows above.

Since the snow is compacted inside the machine, there is a build up of rotational force. When the snow is removed by a stick or by hand the impeller will rotate sometimes buy as much as several inches. This is enough to slice off a finger or even a hand. At the very least there is going to be significant damage to your limb.

There are no warnings in most snowblower manuals or on the machine of this problem. The bottom line, is never stick your finger or hand anywhere near the impeller or the augers when the snow blower is plugged by snow. Wet snow appears to be the most significant problem. Always use a stick and be patient and work at it until the snow was removed. Better to have the stick get cut in half than your fingers.